Gustav Klimt (1862-1918) and Egon Schiele (1890-1918), both are foremost early modernist artists in Vienna’s. Two common themes of drawing concepts appear on their works, one is drawing inspiration from their life, as well as from controversial explorations of the nude and sexy human figures. In their paintings we see the collision of the two different drawing lines and compositions. Schiele’s works are more “beast style” than Klimt’s, focusing on the strength of drawing lines and a single focus figure. 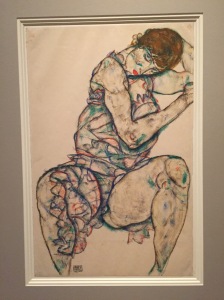 All these paintings present the aesthetics of desire and sex of the both painters. However, trace back Schiele’s story, suffering from prison experience and financially strapped showed how conservative are viewers at the period. In that era, if you challenged the common aesthetic of nude, you had to be judged to public critics through their “common aesthetic” Yet, nowadays, do this generation ready to respect and accept beauty of erotic creation? I am not sure about general opinions, but I am certain the acceptance and respect of these young people who stay echo chambers of art are much better than before.

A fashion creator, film imagemaker, base in London and Taiwan. “Fashion is not just about decoration, fashion is about statement." Authentic beauty often becomes my inspiration. View all posts by MoonMood Lab