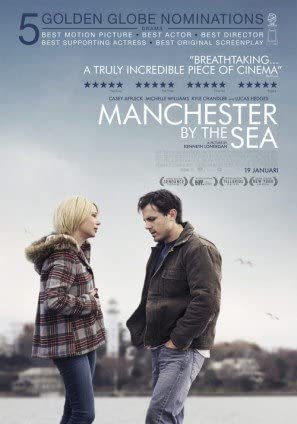 In the home town, Lee met his ex-wife Randi in the street

Randi: I said a lot of terrible things to you. My heart was broken, and I know yours is broken, too.
Randi：「我對你說過很多傷人的話，可是我的心碎了，我知道你的心也碎了。」

Lee: No, you don’t understand. There’s nothing…
Lee：「不，妳不了解。我的心死了，已經一無所有了…」

Human get more understand about a person’s personality by the approaches how the person handling.Some people choose to blame to ease their emotions, whereas others stay in endless self blame.We all choose the approaches and emotions that we think is most appropriate to deal with the event. Emotion makes us blur our vision and lose our rationality. Normally, Destiny often comes at this time. Choosing ending this, or supporting together ?

Maybe it is better time to stay back and take a little break.
However, how many people could have survived in that dramatic situation, could we?

The review to the film director’ perspective

Following the subjective operation of the camera, Lee always made trouble when he was drunk in pubs. At first, I thought he was an alcoholic, with bad temper and instability. All the negative comments were attached to him as much as possible. However, in the close-up of the three photo frames, my vision was blurred by tears. Lee had been punishing himself, letting himself be beaten, poor accommodation environment and isolating himself.

If he let himself suffer a little more, he might feel less guilty.
Yet, the guilt could not be released unless you release yourself.

In the beginning part of the film, there are many seemingly unrelated clips… But with the accumulation of clips, the audience’s emotions influence unconscious resonance. The strength of this film creation gives viewers a brain “shot”. In the second close-up of three photo frames, I understood, the all “seemingly unrelated” chips quickly flashed through my mind, such as a glasses of drunkenness. I never feel so awake at the moment.

I always believe in the influence of film, it’s like the learning process though the other people’s lives, As spectators, we take this as a mirror.
We are all learning unconsciously.

As David Mamet ‘book, On Directing Film (P32, 1991) , documented that the mechanism of film is actually the same as that of dream, because dream is the final face of film, isn’t it? The images in the dream are so diverse and interesting.
In the human brain, most of them are unrelated pictures, the juxtaposition of these images makes dreams so powerful. They are not only incoherent, but also most people think that they are meaningless when they see these juxtaposed images at the first sight. However, as long as the heuristic analysis shows, this is the highest level, It’s also the simplest order of organization, so it’s the most profound, isn’t it?